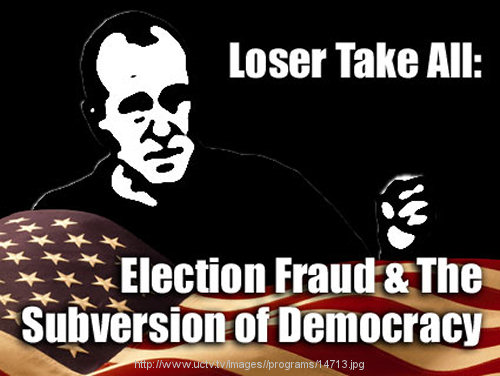 The American elections perpetually televised by our Kleptocracy-controlled media are a smokescreen of false choices distracting attention from even more false choices.  At the presidential level and likely others, our election results are predetermined:  If not by the billions poured into brainwashing voters through the media, then by rigging the voting machines and if necessary having a tainted judiciary overrule recounts:

Psywar: The Real Battlefield is Your Mind
http://www.openfilm.com/videos/psywar

This Orwellian subterfuge distracts the attention of the Sheeple from other false choices that have far more impact than which corporate puppet gets to sit in the Oval Office for four years.  Those choices currently include: the National Defense Authorization Act of 2012 (NDAA) – a loss of real freedoms in return for protection from fabricated threats; the Stop Online Piracy Act (SOPA) and Protect IP Act (PIPA) – Internet censorship disguised as intellectual property protection; and the Keystone XL Pipeline Project – which will give us dirty energy and ditch-digging jobs at an ecological cost that may include the main water supply for the American Heartland – approval for which was accelerated by a clause buried in the recent Payroll Tax Cut legislation that received bipartisan praise.  This deceptive spin and doublespeak has been going on for years, and will continue at an ever-accelerating pace now that Corporate Fascist Puppet President Barack Hussein Obama signed away our Bill of Rights on New Year’s Eve, while we were watching balls drop and he was in Hawaii, about as far away as he could be from the uprising of an angry citizenry that never materialized…

IT IS NO COINCIDENCE THAT OF THE LAST 14 U.S. PRESIDENTS, 7 HAVE BEEN DEMOCRATS AND 7 HAVE BEEN REPUBLICANS.

Mainstream media focuses on America’s two-year election cycles as if who wins or loses in the swinging of the pendulum was a matter of life or death, when in fact even at the Presidential level it makes no more difference than the outcomes of Monday Night Football, American Idol, Dancing With The Stars, Hillbilly Handfishing, the trial of Michael Jackson’s doctor, or the latest Kardashian crisis.  Our elections are staged to give Sheeple the illusion of control so they will (a) vent their frustrations and expend their energy, emotions and resources supporting or attacking the Puppet on the Left hand or the Puppet on the Right, and consequently (b) never recognize and challenge the common omnipotent Puppetmaster.  As long as corporations own the politicians, it’s futile to believe we can “CHANGE” things with our votes.

We sometimes use links shortened with http://tinyurl.com to so they don’t break in emails. If you actually think we would use them to cloak phishing or malware, open them with this: http://longurl.org. We also want to thank the web design miami, web designer miami and web developer miami who support our efforts.